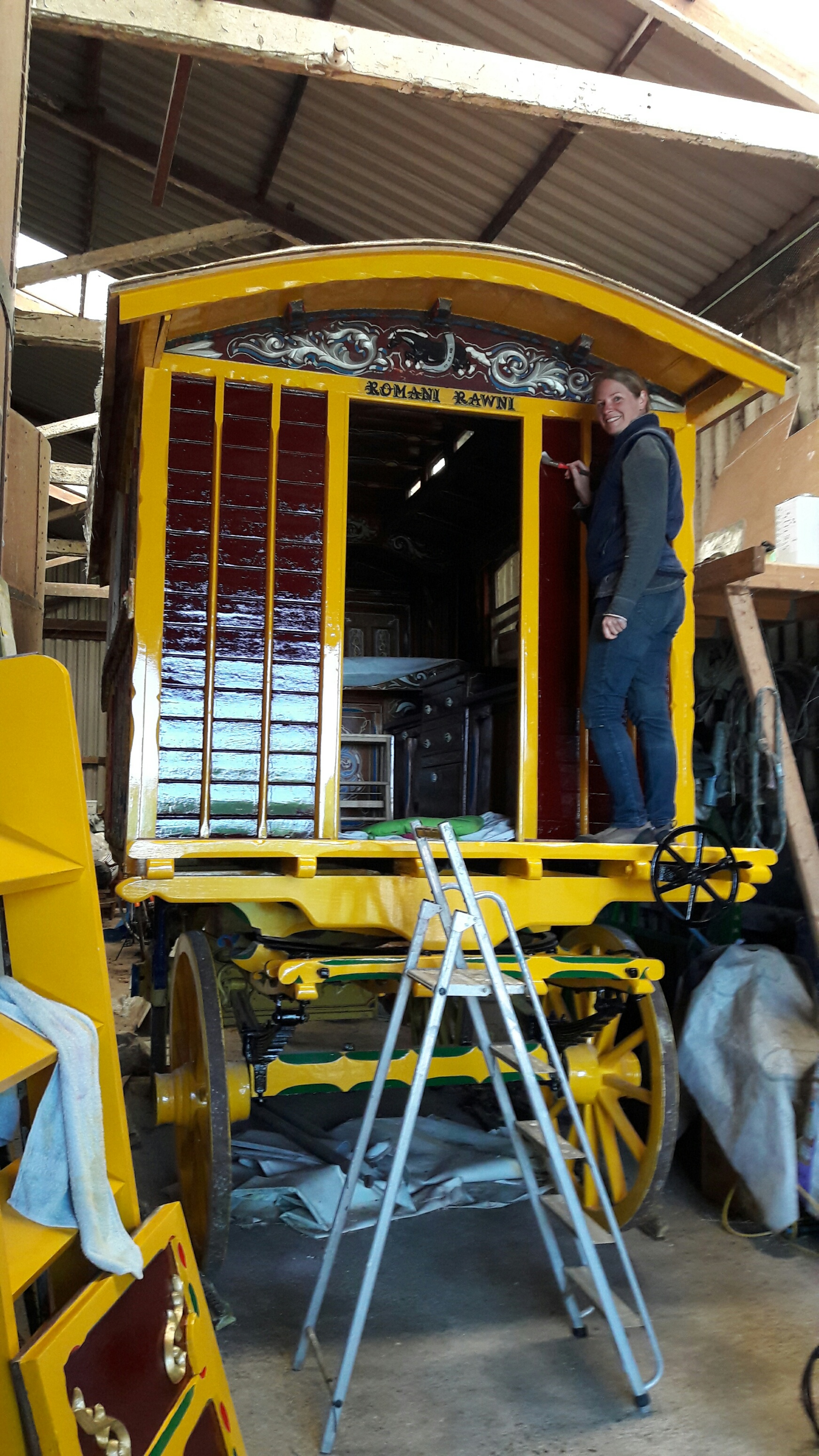 On the road to restoration

Amy, Vicky and Ken have been busy bees over the winter repairing and repainting the approximately 130 year-old travelling showman’s wagon.

After being left out in the orchard the previous winter while one of its wheels was away for repair, the paintwork was peeling and we’d repeatedly had to carry out running repairs on the leaky roof (according to our sources this was always a perennial problem – wagon dwellers had to repaint the roofs every summer to keep them watertight).

As soon as the camping season closed last year and everything was packed away, we began our renovations. The first job was to remove the roof canvas and some of the wood, and allow the roof to dry out.

Next we turned our attention to the paintwork, and began stripping back layers of gunky paint dating back to the mid-eighties when the wagon had its last major renovation. There were some interesting colour variations over the years which gave us some food for thought. We did eventually find some small remnants of what we believe was the original paint, under some decorative woodwork which we removed. The ‘unders’ (wheels and chassis) of the wagon bore the makers mark of Howcroft of Hartlepool. Historically wagons from this maker would have been painted in ‘Crimson Lake’.

Sadly we have no pictures or history of this particular wagon, and with something this old it’s hard to know what is original – it’s a bit like Trigger’s broom from Only Fools And Horses (which he has maintained for 20 years – it’s had 17 new heads and 14 new handles). However as we mused on this over the roughly 700 (wo)man-hours spent inhaling burning paint fumes and shaking chips of paint out of our hair, we realised that previous owners had changed the colours to their liking over the years, and that we are part of its history too. We decided to keep the main colour – yellow- the same, paired with Crimson Lake, and a main accent colour of green. Much of the carved woodwork (probably not original) was silver, which definitely wouldn’t have been available in the 1890’s, but gold-leaf would, so we are going to try painting this gold instead.

We bought specialist paints from Craftmaster, based in Over, whose experienced advice has been invaluable. However we were a bit daunted when we discovered that after stripping, filling and sanding down we would need to apply a total of eight coats, not including the decorative brushwork! Most coats would require sanding in between and then careful dust removal using a sticky tack-cloth before the next coat.

While Amy and Vicky were applying primer and undercoat, Ken was turning his attention to the woodwork, which was rotten in places. Hardwoods were sourced from our extensive family stash (some of it having moved house more than once) and carefully cut, shaped, inset and glued into place. Craftmaster advised applying fibreglass to the roof as an acceptable modern method of keeping the rain out forever, so this also fell to Ken with his ample experience of using it when building aircraft.

After seven months labour of love the finish line is in sight and we have only (!!!) decorative brushwork and two coats of varnish to go. Wish us luck as the decorative stuff is definitely a skilled craft, which we can only hope not to bodge too much.

Just as well we decided to only tackle the front this year – we have the other three sides to look forward to!

Make your choice in the box below to see our availability.

Sorry, this calendar requires javascript in order to work.

Escape to the country

Pick a date and book your green getaway.